A week or so back, I was at a conference table with another lawyer and a client. The subject was, of course, debt and a pending foreclosure. I’d known the attorney for some time, always thought of him as a sort of analytic, ‘just the facts, ma’am’ kind of guy.

So, he shocked me when he, emotionally, started talking about the movie 99 Homes, several years old now, but … well, here’s what I wrote about it after it came out:

99 Homes is a kick in the stomach. It’s visceral, it’s brutal. 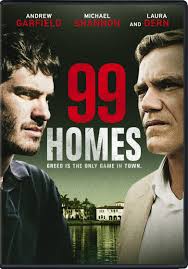 begins with a court hearing in Orlando, Florida. A twenty second hearing during which a character, alone before a judge in a chaotic courtroom is told his paperwork is not in order and even if it was it’s too late and he will be evicted by the bank in the morning. Quick, devastatingly direct.

The subsequent eviction scene was tense and just heart-ripping. It was hard to watch.

Something really hit me in the brief moments before the sheriffs come –  it’s a quick, easy to overlook shot, though that it’s repeated later in the movie, a few times actually, albeit in different forms.

This is it: the homeowner’s sitting at a kitchen table buried in paperwork. He’s frantically burrowing through it while calling attorneys on his cell phone. It’s crystal clear he’s ignored dozens – at least – notices from the bank, court, and the sheriff’s office.

Later, as the movie takes some dark turns and heads toward the ’99’ homes of the title, it’s obvious that most of the people Michael Shannon (great in this, as in almost everything else) is evicting have done exactly the same thing – they’ve ignored notices, even ones stuck on their front doors by day-glo red tape. 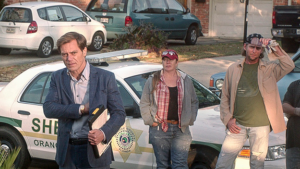 It’s a theme I’ve explored more than a few times and really thought I had a handle on. But seeing it … was hard. There’s a natural reaction to wanting bad news to go away without having to do anything. There’s the depression that hits, the ‘nah, this isn’t really happening’ denial … well, really most of the steps normally associated with the grieving process.

Except here, as so vividly shown in the film, there is no acceptance, just sheriffs and a bank rep at the door to wrest the home away.

I’m still a little rocked by this but I’m pretty sure the next time someone hesitates before hiring me I’ll just tell them to watch 99 Homes and get back to me.