In 1927 a very successful businessman bought a house in New Rochelle, NY. It was a few blocks from New Rochelle Harbor and right on top of the railroad into Manhattan.

The buyer, the son of German immigrants, earned the equivalent of $112,000 in 1927. Well-known in his field, a real up and comer, he was clearly destined to earn more. A great deal more. 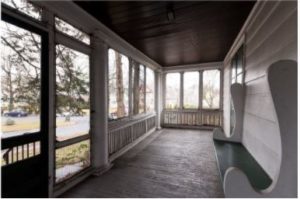 He grew up in poverty, his father was an alcoholic and frequently unemployed, his mother worked as a maid. From a young age he helped his mother with her work. She was the breadwinner, the disciplinarian, and he devoted himself to her.

He worked his way to Columbia University, left early to pursue his career, had success from the beginning, always took care of his mother. He bought the house in New Rochelle as a Christmas gift for her.

It was a three bedroom, rather plain house with possibilities. He took over the $10,000 mortgage already on the house and put the title in his mother’s name. Payments were $255 every six months.

He moved in with his parents and began an extensive renovation project. The house was shortly transformed into a showplace.

Our man’s career blossomed, the house was steadily improved, things were idyllic. Then our guy got married in 1933 at age 33. Perhaps unsurprisingly, his new wife and his mother did not get along. At all. The couple moved out of the New Rochelle home in 1934, though he continued to pay the mortgage.

The house was foreclosed on, the parents were forced to move out. Their son received another pay raise, was earning the equivalent of $620,000/year in 1939 when he was diagnosed with a rare, terminal disease. He died in 1941. 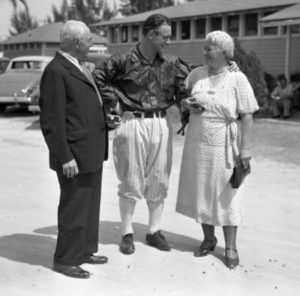 Yes, our man was New York Yankee Hall of Famer Lou Gehrig. His life, obviously, has been well documented, he is the subject of a some very well done biographies and one iconic movie, Pride of the Yankees. And yet, no one can figure out why he let the house go to foreclosure.

He wasn’t showing the effects of his illness in 1937, he had the money, but, as is noted by every biographer, his wife and his mother basically hated one another. It’s possible that as the house was in his mother’s name, Gehrig never knew about the foreclosure action. It’s possible that Gehrig’s wife Eleanor simply told Lou to stop paying. It’s also possible that the family decided to walk away from the house.

It’s a mystery, but we can attest to the fact that not all foreclosures make any sense.

The house that Gehrig re-built is still there. It’s had a long, strange history. It’s 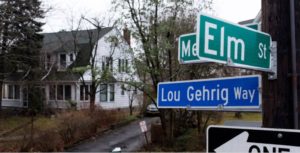 exterior was used in Pride of the Yankees, though the residents at the time had to sue the the Samuel Goldwyn production company to receive compensation for allowing them the run of the house for a few days. They settled for complimentary tickets to the movie after it opened in New York.

Over the years the house has been in foreclosure several more times. The last time was in 2016. It needs work. It’s fallen behind many of the homes, all built around the same time in 1905, in the neighborhood. It seems that it’s primary value is that it was once the home of Lou Gehrig and he probably did some the renovations in the late 1920s and early 1930s himself. That seems a little tenuous and potential buyers seem to feel the same way.

The house did sell a few months ago,. The yard is overgrown, the back of the house is a mess, the interior needs work and updating, the new owner is hoping to sell it to the New York Yankees to establish a Lou Gehrig Museum on site. The Yankees don’t seem to be that interested – New Rochelle is not all that close to Yankee Stadium.

If you look at some of the other houses in the surrounding area, you can’t miss the fact that many of them are beautiful – grounds, exterior, interior – Colonials kept up over the last century.

Lou Gehrig’s house is a pretty solid example of the lingering effects of a foreclosure in the neighborhood.