Facebook Twitter Email Feed LinkedIn YouTube
Home »Debt»Debt, Judgments, and Liens
Last week I wrote about debt and AMC’s Lodge 49. A show in which debt is so pervasive it’s another character. This is the flip side of that conversation – the end result of many debts.
I don’t know about you, but sometimes my idea of fun is getting judgment liens paid off.  Yep, that’s right- it’s kind of a cool challenge and can be really satisfying. Taking care of judgment liens has been a satisfying part of being a lawyer for a long time, the letter below is to Attorney Abraham Lincoln about just that. 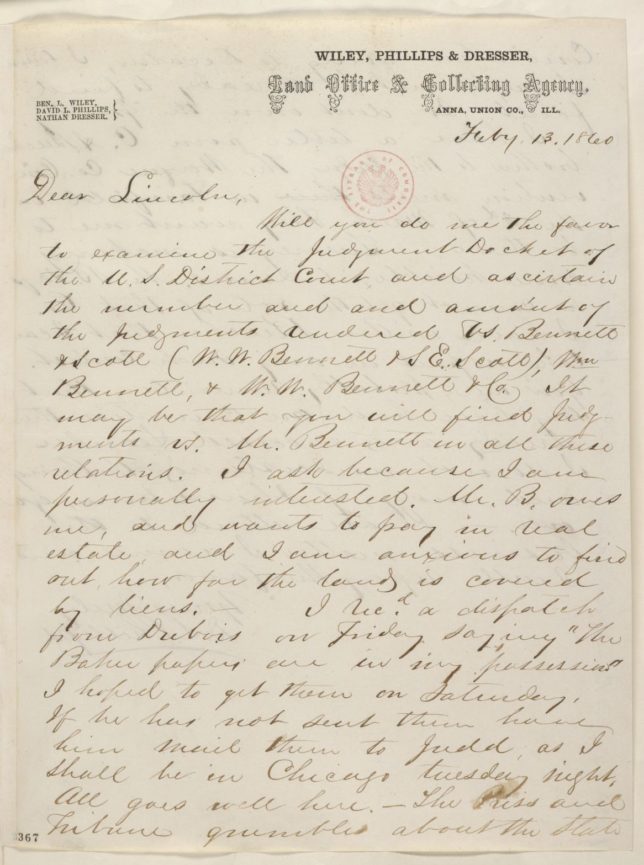 Last month a client, who was in foreclosure due to unpaid property taxes, found a buyer for her home.  The house needed a lot of work, she was unable to keep up payments on the taxes, and decided to sell.  She had about a half dozen judgment liens that resulted from old unpaid credit card accounts that remained outstanding.  In order to close, I had to track them down and get them settled.
At least there was enough money from the equity in the property to pay them at closing.  If this were a short sale, or if there wasn’t enough equity to get them all paid and still leave her with some cash out of the deal, we probably wouldn’t have bothered. (Then my strategy for her would have been to keep her in the home as long as possible and eventually move when the time came.)
Four out of her six unpaid liens were simple to deal with.  In addition to getting the lien information from the closing attorney’s title search, the original case information is usually available on the court website– www.jud.ct.gov.  I put my client’s name into the search field and found the cases, including the names of the lawyers who initiated each suit against her.  I just had to call them up and make settlement offers.  We averaged just about 50% overall on those.  The lesson here is it is always worth trying to get a discount so that the homeowner can keep as much of the cash out of the closing as possible!
I’m still tracking down the other two liens.  Most of the cases against my client were brought by third party “debt buyers”, companies you’re probably familiar with such as Unifund, Midland, CACH, Portfolio Recovery, Velocity Investments, Cuda & Associates or Lienfactors, etc.  The problem here is that the law firms that get the judgments don’t often continue to service the judgments, especially 5 or more years after the judgment enters, which was the case with my client. I know with a little more effort I’ll find the companies currently handling the judgments and get them settled and paid.  But in the mean time, we have to set aside the full amount of the judgment for these two liens in order to close, and my client won’t get anything that is left over until we know what these companies will accept in settlement.
She had another creditor who obtained a judgment but had not filed a judgment lien.  We still settled that one out because I feared that if we did not, and sold the house, the creditor’s attorney would discover my client disposed of her only asset and it would cause a major problem later.  It hurt because it was the highest balance of any of her outstanding accounts, but the closing attorney and I decided it was the right thing to do.
I regularly recommend selling to people who have equity but cannot afford their homes in the long term.  My experience with the creditors’ bar is that they will always take a settlement offer, no matter whether the account has been reduced to judgment and no matter how old the judgment is.
Let me know if I can help any of you resolve judgments or credit issues.
Share on FacebookShare on TwitterShare on Linkedin