Lehman Brothers collapsed ten years ago this week triggering the Recession, the effects of which are still lingering. I, certainly, see them almost every day. 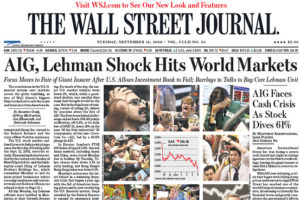 The spate of foreclosures that closely followed Lehman and AIG’s collapses are still clogging courts across the U.S.. According to a few recent reports I’ve read, foreclosure filings won’t peak for another two years. All told, that’s at a dozen years of misery for a significant percentage of Connecticut homeowners.

The years since the collapse also happened to coincide – almost exactly – with the most prolific, almost instantaneous, exchange of information in human history.

An entire industry has arisen around these theories, complete with handy solutions to ‘fix’ your foreclosure, maybe even get a ‘free house’ out of the deal  – a favorite phrase. Many of the sites offering these also offer a vast index of links to get you started. They usually start out free, then . . . well, you know.

This stuff is out there, they’re up there in the Google search rankings and pretty hard to miss, and, as far as I can see, have resulted in one, two max, ‘free homes’ in twelve years and millions of foreclosure filings. The lottery has better odds . . . I’ll also note that in one of those cases the legal fees – the case went to a state supreme court – exceeded the value of the home. By a lot.

What the preponderance of these sites, and all the ‘magic-erase-your-debt’ company sites, really does is bury the lawyers and court services and everyone else that can really help while obscuring the legitimate issues and solutions of the for

Case in point, a large foreclosure firm filed against a homeowner in southeastern Connecticut about a year ago. The homeowner skipped a response in state court and went straight to Federal District Court with a complaint that the court kindly referred to a ‘somewhat repetitive, verbose, and dense.’

The homeowner’s complaint was straight off several self-help websites. It attacked the ‘system’ while ignoring the nuts and bolts. The district court was not unsympathetic to some piece of the argument, tried several times to direct the homeowner toward something legally solid (the court, in fact, did everything but highlight the relevant passages in neon yellow), failed each time as the plaintiff merely regurgitated their first – and only – argument. Endlessly.

The homeowners missed the golden opportunities offered by the court; the foreclosure firm made a half a dozen procedural errors in their pursuit of the state foreclosure action that the homeowners – guided by the web-based conspiracy crowd – missed in their attempt to slay the giant.

After a long and tortuous process, the homeowners lost; the foreclosure firm touted it as a notable, precedent setting win on various industry web sites. (Every side is entitled to their own illusions).

Maybe there was (and is) a conspiracy (s), certainly a lot of really bad things happened to take down the economy. The thing is: none of that matters – the foreclosure process is not the place to blow the lid off any of that. It’s the place to work to either keep your home or stay in it as long as possible while you rearrange your life.

These websites and self-help programs offer a narrative for a confusing, stressful time. They do not offer realistic  solutions for going to court to defend a foreclosure.