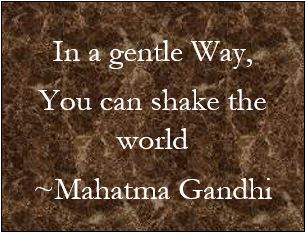 I have a friend, well actually someone I would feel lucky if she called me a friend, whom I met many years ago at a networking event and we have seen each other at various events and meetings over the years.  I knew that she spoke some French and German and did things like organized get-togethers for French-speakers and German-speakers, and that she played piano and organ.  She is also a real estate agent and that is how I met her.  But unlike all the other small business owners I have met over the years, she isn’t waiting until her business “takes off,” or until she makes a certain amount of money, to do the things she enjoys and that would make her life and the lives of others better.  As small as it seems to get a bunch of people together to practice speaking French once per month, she takes the time to do it.  She doesn’t see it as taking time away from working and making money and therefore something she shouldn’t do or can’t do or that she should wait to do.  It’s important to her, it’s important to others, and it’s something she isn’t waiting to do.

I learned recently that she has added yet another interesting and generous activity to her weekly routine—she plays the piano and organizes a choir for people who get lunch at a particular soup kitchen in Hartford.  The meal is served at noon, she arrives at 11 and anyone else who is there who wants to sing can join the group.  The first week, back in May, there were apparently only about four reluctant participants.  But as the weeks passed, and she continued to appear and warm up the piano, more and more people have been joining.  One week there were over 20 singers!  They also recently sang in State House Square and Kathleen Malloy, the governor’s wife, joined them.  After each session now, the singers tell her how much they enjoy the choir, how it makes them feel good and especially after meeting Mrs. Malloy, how they actually feel like someone, for the first time in their lives.

What is also interesting about this is she had no idea what the result would be, how the option of singing for a little while before eating lunch would affect the patrons of the soup kitchen, how it would change their lives or hers.  But she did it anyways.  She stepped into the unknown and just went with it.

Just an hour per week, and she is making such an impact.  Without concern that she could be out showing a house to a client, and maybe making a little more money if she worked instead of volunteered.  She isn’t waiting to live her dream, she is doing it now.

If only all of us took an hour per week to do what makes us each feel happy, something we know is doing good for ourselves and others, what would our communities look like?  How much better would our little world be?

I’m sharing this, instead of my usual stuff about foreclosure and mortgages and the headaches of being in debt because I hope highlighting what my friend is doing will inspire you to not wait to do the things you want to do until ___ happens.

Let me know what you think, let me know if you are already living your dream, or what you plan to do instead of waiting for the right moment, the right amount of time or having enough money.