The first season of Lodge 49 ended a few weeks ago (along with the latest season of Better Call Saul, I’ll write about that later). I waited to write because this piece contains a mild spoiler. 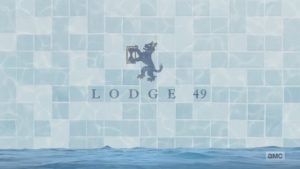 There are great characters who are very real people, it occurs in Long Beach, California which is an excellent stand-in for so many things about 2018 it would be impossible to list, there’s a mystery out there somewhere, there’s some intriguing as yet undisclosed mysticism swirling around everything and everyone.

So, yeah, I liked it. I was so engrossed in it I didn’t realize until forty-five minutes or so into the last show – and I did so with a real jolt – that the entire show was about . . . debt.

The debt of the middle class in 2018, with Long Beach still feeling the effects of the Recession.

I was jolted because looking back I saw it was there all along. I’ll bet ten minutes doesn’t go by – per episode – without someone talking about debt – their own, someone else’s, the Lodge’s (it is, after all, a building with a mortgage).

Debt is everywhere and when people aren’t talking about it there are signs in the background blaring it. 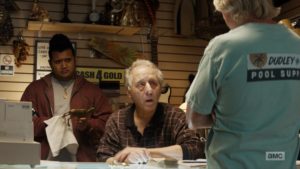 A main character is a pawn broker. The pawn broker isn’t nasty, makes almost fair offers on property, seems to have a sense of humor, is a rock-solid businessman.  He also makes payday loan, title loans, and personal loans with interest rates around the thirty-percent mark. He also tells every ‘client’ exactly how stupid they are for taking whatever loan he’s offering before they put pen to paper.

The protagonist, Dud (yes, no ‘e’) is into him for big bucks and his car. Dud’s father owned a pool servicing company, went out to surf one afternoon and never came back. The business had loans far in excess of its value. Their house was foreclosed on and auctioned off.

Dud’s twin sister Liz owes the bank $80,000 – she co-signed a business note for her father. She’s obsessive about paying it down, makes every payment on time even though it stretches her budget to the breaking point, has been paying for over a year when she is shocked to find she has only been covering the interest.

Ernie works for a company that can’t pay commissions until it gets advances, he’s into the pawn broker. The lodge itself is being foreclosed on. The mysterious rich guy who pops into Dud and Ernie’s lives (a great Bruce Campbell) is dependent of leveraging – he borrows to invest. The people who bought Dud and Liz’ childhood home at action are clearly underwater, all the land in town is about to be declared toxic, they’ll never resell.

Debt, debt, everywhere. It’s not oppressive, it certainly doesn’t put a damper on the show, but it is always there, like another character.

No one does anything about their debt, except add on more in the hope of getting by long enough to do . . . something that will maybe fix it, . . . until the very end, the tenth episode/season finale (that raised more questions than it answered but made me want more).

That debt finale: Liz walks into her bank to talk to about her loan. The ever helpful, ever cheerful, manager says “The outstanding balance is eighty-thousand, five hundred and thirteen dollars.” Liz answers, “That is 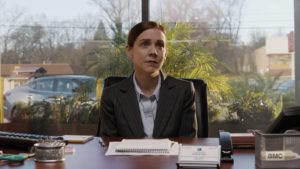 outstanding,” – a line I am sure I will use one of these days.

Liz then explains that she ‘really doesn’t have a place in her life’ for the debt anymore. She slams her entire life’s savings on the table, eighteen thousand dollars or so and explains – I won’t get into the specifics because those are spoilers (I think) – this is all you’re ever going to get from me.

The shot of Liz back in her car with her ‘account closed/paid off’ paperwork is outstanding. 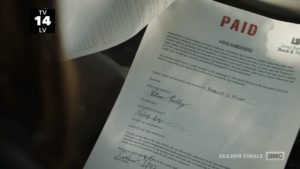 It, of course, doesn’t really happen that way but it’s not a bad representation of what can happen if a debt is approached correctly, (check out my book for more on this). The end result, have the debt go away, that’s just priceless. Liz’ relief is palpable and absolutely spot on.

You’re not a character in a prestige series TV show, you don’t have to live with debt.