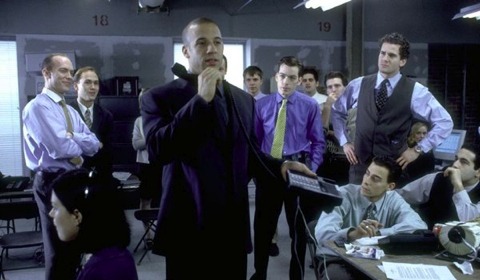 collection agencies you’d normally think of, but the collections agencies that buy old debt and go after it with a vengence, They buy it for pennies on the dollar, use boiler rooms out of movies like … well, Boiler Room, to collect on it, seldom report the payments, resell the debt … as John Oliver showed a few months ago, the cycle never ends.

Halpern points out that President Elect Trump wants to roll back Dodd-Frank. A perhaps unintended consequence of this would be the almost complete unfettering of the collection industry.

With that in mind, we thought a look back at one of our first blog posts would be in order – because some things never go away.

Last Monday a friend of mine received a phone call on his cell phone from an unidentified Rhode Island number. He went to college in Providence, has friends there, answered. 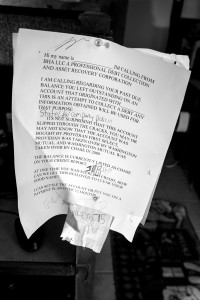 Script from a ‘collection’ company a few dozen times removed from the debt.

This is what he got – “Hi, Mr. Loman, this is an attempt to collect a debt, anything – yada, yada, yada … can you confirm the last four digits of your social?”

“Okay, well, I have an account here from Verizon, you owe twelve hundred dollars.”

“From any one of the following companies now part of Verizon …” the guy then read off a very long list of companies, a list that pretty much summed up the telephone industry of the 21st Century.

“No,” my friend answered.

“I don’t owe anything to anyone on that list.”

My friend has a law degree and a long history of dealing with total BS, so it finally hit him to ask, “Wait a second, what’s the date on this supposed debt?”

The guy on the phone fumbled around, Biff could hear papers being shuffled, murmurs of other voices from the boiler room, then, “Yeah, got it here, 2003.”

“You’re calling me about a twelve year old debt?”

“Yeah, well, then it sucks to be you, have a nice day, don’t ever call again.”

Done. Or almost, because then Biff Loman did a reverse number lookup on the ‘collection agency’ that had never identified itself. The number was associated with a manufacturing firm in Pawtucket – where Biff worked and lived in the summers in college – that went out of business in the ’90s (Biff said it was hardly in great shape when he was there in the ’80s). This is known as ‘spoofing’ and it’s hardly a sign you’re dealing with any kind of stand up, legitmate company. 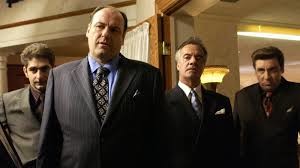 There’s little doubt this was a collection ‘company’ that buys up old debt for pennies (if that) on the dollar and then tries to collect on it. They are hardly known for the gentility of their subsequent collection activities.

My friend had, in fact, just dodged a deep, black hole, of hurt. As pointed out by Jake Halprin last summer in Paper Boys, Inside the Dark, Labyrinthine, and Extremely Lucrative World of Consumer Debt Collection, an amazing, jaw-dropping article in the NY Times – old debt is resold over and over again and is a spectacularly profitable industry. The problem is:

A gamut of players — including debt buyers, collectors, brokers, street hustlers and criminals — all work together, and against one another, to recoup every penny on every dollar. In this often-lawless marketplace, large portfolios of debt — usually in the form of spreadsheets holding debtors’ names, contact information and balances — are bought, sold and sometimes simply stolen.

So, paying on the so-called debt, even a let’s-get-rid-of-this nuisance amount of, say, $120.00 would accomplish only one thing – the ‘agency’ makes about 120% profit and Biff’s ‘settlement’ is never reported to anyone and the debt is pretty much free to be sold again … and again.

Yet, these guys collect hundreds of millions of dollars in what is essentially a completely unregulated industry.