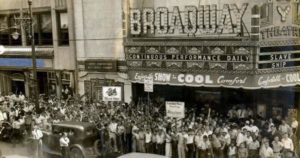 There’s a phrase that’s fast dying out. Oh, a few people still say it, usually when they get stuck listening to a repetitive argument – you know, a roll of the eyes as the speaker comes back to the same point yet again, then, “This is where I came in, I’m outta here.”

Easy to envision, we’re in the middle of a Presidential Election cycle.

Most people, though, don’t know what the origin of the phrase is. And, there’s no reason they should, it gets increasingly more archaic every day. It’s from the days when movie theaters ran features on a continuous loop. Walk in for a 4:15 show at 5:00, watch the last 45 minutes or so, then stay as the movie starts again. Bang, right back into it, you stay until you’re caught up, you leave … where you came in.

This was such a thing that some movies – Psycho, in particular – used it as a marketing 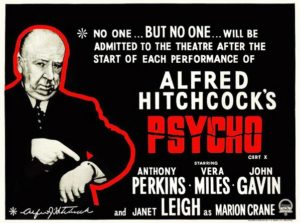 tool. “Absolutely No One Admitted After The Start!”

Today, there are so many ads and trailers before every movie that I, at least, need to be reminded what film I’m there to see by the time the theater finally goes dark. Even without all that, in this day of Spoiler Alert, it would never work without some form of violence.

Also – can you imagine seeing Pulp Fiction this way? Impossible to follow, I’m willing to bet.

Which – you had to know this was coming – is exactly what showing up in court after the case starts is: close to impossible to catch up. If they still let you in, because a lot of court actions come with the Alfred Hitchcock admonition, “No one … but no one” can participate after certain court proceedings start.

In court particularly foreclosure proceedings, we have to show up on time, sit through the ads and the coming attractions and go step by step, on time, from there. There’s little to no room for ‘coming in’ at any other time.