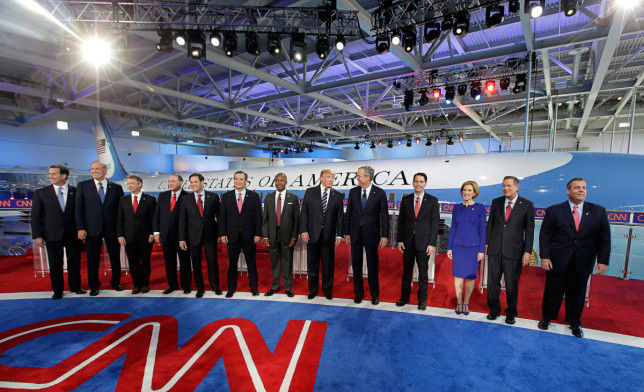 There are three Republican Presidential debates over the next six weeks and they are sure to have a chilling effect on my clients. I’m not referring to the politics, or the issues, I’m talking about Donald Trump’s business background and what are sure to be continuing attacks by one or more of the other candidates.  Specifically, I’m talking about his bankruptcies. To be fair and accurate, his corporate bankruptcies.

In the September 16th debate, Carly Fiorino made this an issue. It was a fair point, of course, but the manner in which she asked Trump about his casinos’ financial problems rubbed me the wrong way.  She was accusatory and made the implication that Trump had used – the verb employed in its most pejorative manner – ‘government programs’ and had played the system. Equally implicit was ‘How could you have done such a lousy, irresponsible job?’

That may be good politics and was probably a fair question. The thing is, I work with people buried under credit card debt or who are facing foreclosure and attacking someone for using the bankruptcy system, and creating spin around it, does not help. These attacks simply serve to add to the stigma and shame that hangs over having debt issues.

It’s well known to lawyers, court officers, judges and anyone who is sees credit card collection matters and foreclosure cases on a regular basis, that the homeowners and consumers involved are slow to respond to court, if they respond at all.  Many people I work with are fighting the shame and embarrassment of having papers served on them at their homes and fear their neighbors, family members, friends and co-workers will find out about their money problems.  Because there’s still a strong Puritan work ethic in the U.S. inertia usually goes hand-in-hand with the perceived stigma of having unpaid debt.

People who start participating in the process late into the game are lined up outside my office door.  Most come heads hung low, sleep-deprived, embarrassed, ashamed, believing they deserve the abuse they sometimes get from collectors or their mortgage servicer.  I spend a lot of time and expend a lot of energy explaining- counseling, really – that, in most cases, they had little to no choice but to fall behind on their bills. You just can’t control certain life events- health, career, market forces, recessions, corporate mergers/bankruptcies/relocations/relevance; divorce; death; children; aging/ailing parents; severe weather; and a hundred other things.

Anything can happen, any time. Mortgages are thirty years long. Something bad will happen to most of us over thirty years that will prevent us from being able to pay our bills on time.  How many things actually last thirty years? The Thirty Years War didn’t last thirty years.  Most marriages certainly do not last thirty years.  Trump’s four bankruptcies occurred over a 25 year period, a time of total upheaval in the casino industry and the real estate market.

The shaming of those who seek out bankruptcy protection or mount a defense in court is unfortunately being reinforced heavily this presidential political cycle.  Bemoaning ‘free stuff’ and drawing dire inferences from another’s business decisions serve only to reinforce the feelings of shame and avoidance that my clients struggle with.

I’m hoping the candidates don’t continue down that road in the upcoming weeks, but I know they will.

Trying to shame a politician is one thing – though I have to believe Mr. Trump is pretty much shame proof.  Shaming someone for participating in a court process that has been a part of our judicial system going back to Colonial America is to shame the millions of Americans who have used the bankruptcy process, or foreclosure mediation, or credit card debt defense, to get a fresh start and subsequently recover financially and start giving back to the economy, is wrong.  It’s anti-Americans, if you will.    (The S on the end of Americans is intended.)

This is important to all of us, no one wants to own a home on a block where your neighbors’ houses are darkened by foreclosure.  That helps no one.